“…I only have to turn up at my coworking space 10 times a month to make it cheaper than a coffeeshop…and here I don’t have to ask a stranger to guard my gadgets while I run to the loo… “and other, cheaper ways to carve out a writing space

Over at my personal blog today I wrote about my love for the coworking space I rent in my town. I jokingly call the old industrial building my ‘writer’s garret’ and my post was called “Everybody Needs A Garret”. 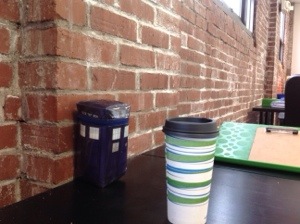 Which got me thinking. While it’s important to be able to write everywhere and any time and in long or short increments, it is incredibly powerful to have a space or a routine that helps you focus on your writing.

Where Do You Do Your Best Writing?

Some people, like me, have the luxury of time, a hip hometown and a little extra moolah, and can rent cheap, shared office space as a writing garrett.

Other people carve out space in a disused closet or the space under the stairs, jam headphones on their ears and pound away at the keys there.

Some people write in bed, on buses, in libraries and coffee shops.

If you haven’t set up your own writing space yet, experiment with some of these ideas until you find out what works for you.

Your Own Writing Space – Some Tips

If you want to try out having a writing space here are some tips: