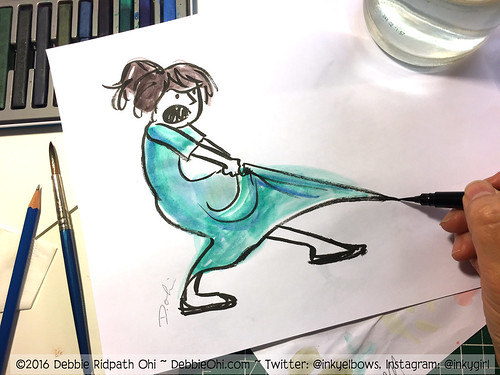 A few days ago, I commented on a Twitter post about a hot-button issue. I don’t normally do that, but I thought I was making a neutral, expanding-the-argument kind of comment.

You can tell where this is going can’t you?

Someone read my comment and assumed I was saying something I wasn’t; pigeon-holed me as someone from the completely different end of the ideological spectrum; and proceeded to make snarky, personal comments every time I tried to defuse the situation.

I had that hot-and-sweaty, blood-pounding-in-my-face, pit-in-my-stomach sensation we all remember so well from the injustices of being a misunderstood 12-year-old.  I wasted hours constructing careful answers and psyching myself up to open up my Twitter feed, wondering if I would find an olive branch or a minefield.

It sucked all the creativity out of my day.

It was such a waste of time.

And the irony of it was, I had, that very morning, reposted Austin Kleon’s advice not to pick fights with strangers on social media!

Find an issue that you COULD have a fight with someone about on social media and instead, write a story.

I promise you that, if you write a story instead of picking a fight with a stranger on social media, you’ll have a better day than I did last week 😉